Into the Darkness : the mysterious death of Phoebe Handsjuk by Robin Bowles 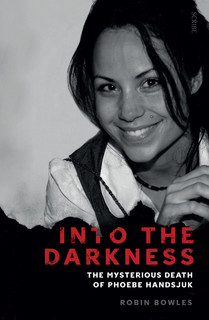 In her investigation of the mysterious death of Phoebe Handsjuk, Robin Bowles takes us into some very dark places indeed. The luxury Balencia tower apartments in St. Kilda Road, Melbourne, were the scene of an horrific death in December 2010 when a young woman was found at the bottom of a rubbish chute. But was it suicide or murder? And if it was suicide, why were there no fingerprints around the opening and handles, or any other details to convince her family that she climbed in herself, and why were her emails and phone records of the previous days, deleted, and no suicide note left in her apartment on the twelfth floor? Twenty-four year old Phoebe was a 'wild child', a free spirit, whose parents divorced, and her life sometimes spun out of control with alcohol, drugs, and older men. Her partner at the time of her death was Antony Hampel, a high-flying businessman, whose father was a famous and powerful VIctorian judge. His sister was convicted of dealing in cocaine, but received very lenient treatment by the courts, and it was suggested that some of her 'associates' in this murky world may have wanted to get rid of Phoebe if she knew too much. The author examines evidence in the case photographs, medical reports, video records, or lack of them, which all add up to a gripping real-life crime story. Like Helen Garner in her investigation of famous murders, Bowles attends every session of the coronial inquiry, assiduously taking notes, and examining body language and behaviour of all parties, who may, or may not, have been involved in foul play. She interviews heart-broken family members, who swear she was looking forward to several family birthdays and - if she was going to kill herself - it would certainly not be in this bizarre manner implying that 'she was garbage'. But perhaps the most famous aspect of this tragic case is the brave re-enactments of getting into the garbage chute, unassisted, with a safety harness, a few girlfriends of her size attempted to climb in. But there were television replays of other attempts when an actual replica of the chute was built for this purpose. We know that certain questions cannot be answered, we also know that power, privilege and wealth can influence criminal investigations. And that is the most chilling finding of all. A compelling read and an extraordinary book.

Congratulations to Margaret Mason, who wrote this review.  Margaret was a winner in the "Read, Review & Win" summer reading program.