This book review was written by David McMahon, a member of the Tuesday Evening Book Club.

This is the story of an unlikely romance between a retired and widowed army Major and an English-born Pakistani shopkeeper in the conservative English countryside (possible Sussex). As he is the main protagonist, we are witness to his thoughts and observations on the social views and prejudices of his family, friends and neighbours. His values are liberal and urbane, in contrast to the narrow-minded attitudes of many around him, nonetheless he is restrained in his responses by his English reserve, extreme politeness and avoidance of unpleasantness.

The author spent her childhood in such an environment, but had lived in the US for twenty years when the book was published in 2010. Well written and with many fine observations on manners, customs and behaviours. The book raises many issues in  a contemporary western country around racial and cultural prejudice, class snobbishness and the conflict between generations within families.

Paradoxically, the Major was born in India, where his father was stationed with British army during the Raj; his love interest, Jasmina, though caught in the close ties of her Pakistani family, was born in England. Like the Major, Jasmina's character is broadminded and intelligent, but must still reconcile her more liberal views, and her own interests with submitting at least in part to the will and customs of her extended family. Though many of the issues are raised and described via the interplay between the characters, the book seems to lack a satisfactory resolution of much of them. Without providing a "spoiler", the ending seems too glib, too sudden and perhaps a little  too unrealistic to be credible.

Recommended as an easy piece of light reading. 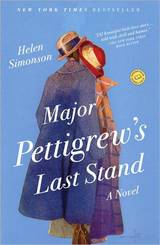