This review was written by Cynthia Haskell, a member of the Tuesday Evening Book Club. 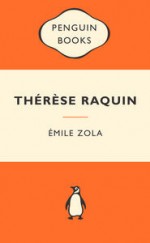 First published in1867, Thérèse Raquin is the fourth novel by French writer, Émile Zola,  self-proclaimed the leader of the naturalist movement, whose members sought to depict everyday, believable reality in all its harshness, brutality and sordidness. In keeping with this, Thérèse Raquin, is a tale of misery, lust and violence. The name Zola chose for his protagonist, Thérèse Raquin, has been speculated to have something to do with the saying ‘You reap what you sow.’ Thérèse meaning ‘to harvest’ and Raquin coming from the colloquial verb raquer meaning ‘to pay’ or ‘to cough up’.

Thérèse is virtually dumped by her French captain father to live in Paris with her aunt, a haberdasher, and her sickly cousin, Camille, after her Algerian mother dies. Thérèse eventually marries Camille and seems condemned to a life of miserable banality and sexual repression until she meets Laurent, a would-be artist and wastrel. The two embark on a tempestuous, secret love affair and come up with a plan to rid themselves of Camille, so they may marry.

It is, perhaps, from this moment in the novel, that Zola’s writing and his art of describing the macabre in all its horror and repulsiveness comes to the fore. Although modern-day literary critics might accuse Zola of too much telling and not enough showing, his writing is almost cinematographic. It is no wonder that it has been made into a play and an opera, and adapted for the screen. In some respects, Thérèse Raquin reminds me of Patrick Süsskind’s Perfume: Story of a Murderer . You know you’re going to be repelled and horrified, but in the same way you can’t stop watching a horror movie, you can’t stop reading!