The Paris Wife by Paula McLain

This review was written by Cynthia Haskell, a member of the Tuesday Evening Book Club.

Published in 2012, The Paris Wife is a fictionalised account of Ernest Hemingway’s first marriage to Hadley Richardson by American author Paula McLain, with whom many readers may be unfamiliar, as I was. This book’s major selling point is that it has been a long-standing New York best seller. However, it seems to be the author’s second attempt to break into ‘fiction’. Her other publications include non-fiction about growing up in foster care, based on her own experiences, some poetry, and as I understand it a coming-of-age novel Ticket to Ride, perhaps also based on her own experiences.

McLain writes the book mostly in the first person from the point of view of Hadley but with some chapters written in the 3rd person from Hemingway’s point of view mostly about his past and war experiences, which rather jarred with the rest of the book. It cannot be denied that McLain’s research is meticulous and her prose and descriptions are elegantly crafted with poignant insights into Hadley’s feelings, yet, as with all ‘historical fiction’ it seems like cheating creativity, the characters and the storyline are already there, and the reader often knows the outcome. Is there also a whiff of cynical marketing in that this book was published on the heels of the actual biography of Hemingway’s first wife by Gioia Diliberto, entitled Paris Without End: The True Story of Hemingway's First Wife, and on the heels of Woody Allen’s film Midnight in Paris? Further, at the end of the day,  this is a book written by a woman for women, a type of high class chick lit and it might not appeal to male readers. However, it has inspired me to read Hemingway’s A Moveable Feast, inspired by his first marriage. 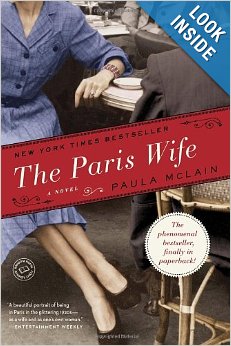