The judges of the NSW Premier’s Literary Awards have selected these six titles as the best in new Australian fiction:

And now (if you live in NSW) you can… Continue

We Tell Stories takes a different approach to fiction.

Might be a gimmick, but it might also be a future for writers and writing. Why restrict yourself to pages (printed or LCD) when your characters can be scattered across the internet... Slice has the characters blogging and tweeting.

There's also a couple of updated 'choose your own adventure' stories, and one where… Continue

Now that's what I call a long overdue 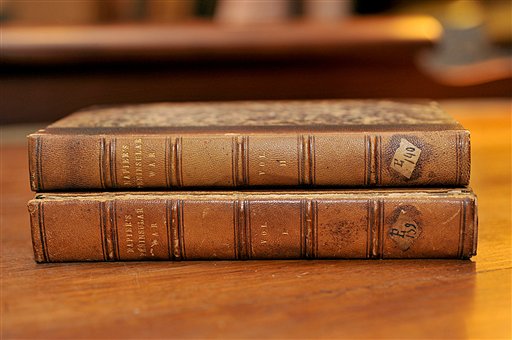 Washington and Lee University has a missing library book back on its shelves — nearly 145 years (52,858 days) after it was stolen by a Union soldier during the Civil War.

The 1842 book, the first volume of W.F.P. Napier's four-volume History of the War in the Peninsula and in the South of France From the Year 1807 to the Year 1814, was returned recently by a friend of one of the soldier's descendants to the Lexington school's Leyburn… Continue

And if you're interested, here's what's happening in the background. We're sending our 'Latest Activity' feed to Yahoo! Pipes, where it gets a bit of regex work to make the titles more human-friendly. The output of the Pipe is checked by Twitterfeed every 30 minutes.… Continue