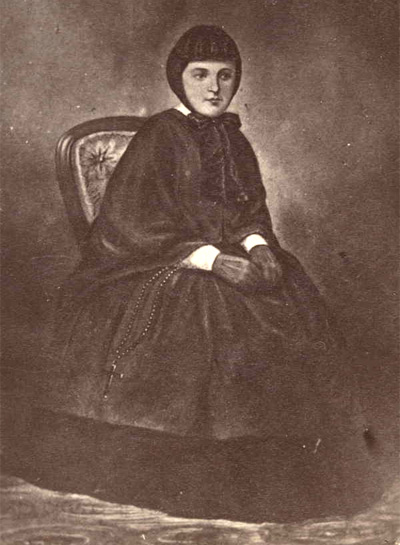 Next month, Noeline Kyle will talk about Constance Emilie Kent and The Road Murder at Mosman Library.

Constance Kent was an English woman who confessed to a notorious infant murder that took place when she was sixteen years old. She served 20 years in a number of prisons including Millbank Prison. When released in 1885, at the age of 41, Constance Kent emigrated to Australia.

She changed her name to Ruth Emilie Kaye and trained as a nurse at the Alfred Hospital, Prahan, Melbourne before being appointed Sister-in-charge of the Female Lazaret at the Coast Hospital, Little Bay. She worked for a decade at the notorious Parramatta Industrial School for Girls from 1898 to 1909, was in Mittagong for a year and was matron of the Pierce Memorial Nurses' Home at East Maitland from 1911 until she retired in 1932. Constance Kent died in a private hospital in Strathfield NSW at the age of 100, on 10 April 1944. Not once did anyone in the Antipodes suspect her true identity.

If you are a true crime enthusiast, if you wonder about what happens to a woman, a human being, after they confess, are tried and then imprisoned for twenty years, you will enjoy Noeline Kyle's tracing of Constance Kent's extraordinary life. Previous publications dismiss her later years, almost 60 of them, in a few paragraphs. Noeline Kyle's book answers these questions and also the question/s of what this long and eventful life can tell us about that dreadful past.

Comment by Jane Floyd on June 18, 2010 at 14:01
I read "The Suspicions of Mr Whicher or the Murder at Road Hill House" by Kate Summerscale - after I met her at the Sydney Writers Festival last year. It was factual and written in 'who done it' style. I never suspected it was Constance Kent who killed her little 2 year old brother! I do recommend reading it. I'm sorry I missed this talk.