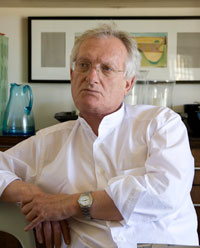 Peter Temple has been awarded the highly acclaimed 2010 Miles Franklin Literary Award for his novel Truth.

Temple had to fight off stiff competition from five other authors, including Deborah Forster, Sonya Hartnett and Alex Miller, to win the $42,000 prize, presented at an award dinner on Tuesday 22 June in Sydney.

The Miles Franklin literary award is recognised as Australia's most prestigious prize and is awarded to the novel of the highest literary merit that presents Australian life.

The awards were established in 1957 and it is the first time a genre novel has won. This decision shows how far the crime novel has developed as a literary genre.

"It unusual for a crime writer to receive such a prestigious award, so cop it sweet," Temple told AAP upon receiving the award.

Truth, the sequel to Temple's highly acclaimed The Broken Shore, is a complex crime novel set against the background of Victoria's 2009 bushfires.

"It was a controversial and challenging short list, accomplished and diverse in ways that made the judges' task extremely difficult," Ms Fraser said.

"Each novel offered a quite distinct and compelling fictional journey."

The six novelists shortlisted this year were Deborah Forster for her debut novel The Book of Emmett, Sonya Hartnett for Butterfly, Alex Miller for Lovesong, Brian Castro for The Bath Fugues, and 27-year-old Craig Silvey for Jasper Jones.

Read the interview Peter Temple gave today on the ABC's AM program.