Don't forget all you Mosman Readers out there. Post a review on Mosman Readers during January and you'll go into the draw for some fabulous prizes. You have to be in it to win it!

In Conversation with Sarah Waters at the Seymour Centre 26 February 6.30pm

If you've enjoyed reading Sarah Waters books: Tipping the Velvet, Fingersmith, Affinity and her latest The Little Stranger you might be interested in hearing her talking candidly about her books at the Seymour Centre in February.
For more information http://mardigras.org.au/mardi-gras-2010/events-calendar/in-conversation-with-sarah-waters/index.cfm

Jonathan Little's The Kindly Ones has won the Literary Review's Bad Sex in Fiction Award for 2009. You can read the winning passages here

Questions for a Bookworm

A series of questions relating to books and reading has been circulating arounds blogs lately. I saw this on Booktager you might want to answer them. Here are mine

Do you snack while you read? If so, favourite reading snack?
Not often but sometimes I like to nibble on Kettle chips.

Do you tend to mark books as you read them, or does the idea of writing on books horrify you?
I never mark books… Continue 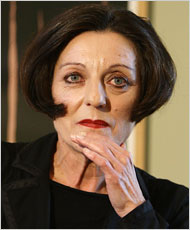 The Swedish Acadmeny announced on Thursday that Romanian-born German novelist and essayist Herta Müller won the 2009 Nobel Prize for Literature for The Appointment a book set against the backdrop of Ceausescu's totalitarian regime. It is a story of a young Romanian factory worker--so desperate to escape the betrayal and hardships of her life that she sews notes offering marriage into the linings of suits bound for Italy. She is found out and is… Continue

British novelist Hilary Mantel, who was bookies' favourite to win this year's Man Booker prize, was named the winner for her book Wolf Hall', her vividly told tale of Thomas Cromwell's rise to prominence in the Tudor court.
Wolf Hall had been one of the hottest favourites in years with, according to Ladbrokes, 80% of all bets on the winner.
The full story from the Guardian

Read.gov an Initiative of the Library of Congress

The Library of Congress has launched Read.gov as part of the 2009 US National Book Festival. On the site you can turn the pages of digitised classics for all ages. Titles include " The Secret Garden" by Frances Hodgson Burnett, "The Wonderful Wizard of Oz" and of course "Uncle Tom's Cabin." The site also includes… Continue

Here is Oprah's List of 25 Books you can't Put Down

Because life is too short to read bad fiction...

so Couldn't Put it Down gives you "some of the best books ever written, rated purely on fun factor and the inability to be put down."

Newsweek has crunched the numbers from the 10 top books lists (Modern Library, the New York Public Library, St. John's College reading list, Oprah's, and more) to come up with The Top 100 Books of All Time. It's a list of lists — a meta-list. Let the debate begin.

The Miles Franklin Literary Award 2009
On Thursday 18 June at a gala dinner held at the State Library of New South Wales. Tim Winton was announced as the 2009 winner for his novel Breath.

It is twenty-five years ago when Tim won his first Miles Franklin Literary Award for Shallows. This year's win means that he is the only writer ever to have won four times in his own right.

On his win, Tim Winton said that this award has tried to do its part over time to stiffen the… Continue

Alice Munro was announced as the winner of the third Man Booker International Prize yesterday 27 May.

The Man Booker International Prize is worth £60,000 to the winner and is awarded once every two years to a living author for a body of work that has contributed to an achievement in fiction on the world stage. It was first awarded to Ismail Kadaré in 2005 and then to Chinua Achebe in 2007.

Acclaimed American author John Updike passed away on Tuesday, January 27, 2009 at the age of 76. John Updike won many awards for his works including Pulitzer Prizes for his novels Rabbit is Rich (1991) and Rabbit at Rest (1982). In 2008 he was awarded the Literary Review Lifetime Achievement Award for Bad Sex in Fiction for his fourth consecutive nominationThe Widows of… Continue

The Literary Review in Britain started the Bad Sex Awards in 1993 to "draw attention to, and hopefully discourage, poorly written, redundant or crude passages of a sexual nature in fiction". Here you can read the shortlisted passages from the 2008 Award.

Take a look at the Angus and Robertson Top 100 Books of All Time and check out how many you've read!
More than 26,000 votes from the public were received for the poll - the fifth such poll - which features a diverse list of books, including 22 Australian titles.

If you have a Mosman Library card, you can access Good Reading Online a fantastic resource if you love books and reading.
Take a look - it is an exact digital copy of the print magazine with the benefits of access to the archive of past issues plus links to interesting websites and more. You'll also be able to browse and keyword search through all issues.

Here is the list of what the New York Times considers to be the 100 Most Noteable Books of 2008.

What do you think? Have you read any? Are there titles that you think should be added?